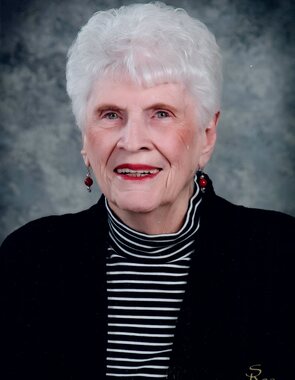 Back to Ruby's story

Ruby Shirley, 90, of Edmonton, passed away Thursday, Dec. 5, 2019 at Metcalfe Health Care in Edmonton.
She was the daughter of the late Joseph M. and Mallie Lowery Thomas.
Ruby was a member of Edmonton Methodist Church and taught fourth grade at Edmonton Elementary for 28 years.
Graveside services will be held 1 p.m. Monday at Edmonton Cemetery with a celebration of life following at Barn Lot Theatre. Visitation will be Sunday at Butler Funeral Home in Edmonton from 4 until 8 p.m. and on Monday after 10 a.m. until the service time.
Ruby is survived by three grandchildren, Susan (Jim) Nichols, of Hyde Park, Vermont, Richey Gawjarone, of White House, Tennessee, and Kari (Jameson) Hughs, of Louisville; two daughters-in-law, Cathy Shirley, of Edmonton, and Bonita Shirley, of Glasgow; a sister-in-law, Susan Chambers, of Edmonton; three great-grandchildren, Aaden Hughs, Avery Hughs and Isabella Gawjarone; and an honorary great-grandson, Arlo Schuette. Several nieces and nephews also survive.
Besides her parents, she was preceded in death by her husband, Morris Lane Shirley, and two sons, Tommy Lane and Joey Shirley; and a brother, Joe Clifton Thomas.
In lieu of flowers, backpacks of food may be sent to the funeral home to be displayed during the visitation.
Published on December 6, 2019
To plant a tree in memory of Ruby Shirley, please visit Tribute Store.

Plant a tree in memory
of Ruby